Dear Leah,
I thought I'd write a diary as I go along and rather than keep it myself, I'll send it to you and you can keep it for me. I shall probably send one to Alex too, and you'll have to ring him and tell him all my news.

The flight over went very well - we seemed to get to Paris very quickly. We had a drink and a cheese roll and biscuit on the flight and then we were there. Charles de Gaulle airport was very modern but very quiet compared to Heathrow. We hung around for about an hour and then got on the plane to Nairobi. We left France at 11.20 (French time) and landed here at 8.00 (African time). The flight was nearly 8 hours, there is a 1 hour difference from France so 2 hours ahead of England.

It's now 2 o'clock and we are having a rest in our room before another walk around. Back to the flight - they got the veggie meal right, because the plane is so much bigger I think they had to, they actually brought us ours first. It wasn't too bad at all, pasta and sauce and salad and fruit - there were cartoons and adverts on the telly and every so often they showed us a map of where we were, how fast and high etc. - which was interesting. They showed a Mike Leigh film; Secrets and Lies which was good although by then I was so tired I fell asleep - I did wake up for the end though !! We tried to sleep but not very successfully. I woke up properly when it was getting light and we were over Ethiopia - there was a bit of cloud but it was amazing seeing the deserts, mountains and rivers. Not much sign of humans at all. It got a bit greener the nearer we got to here and as the plane came down I could see small native villages - dead exciting !!! As we were coming down to land nearer the airport we were still flying over these villages and I saw people and animals - blimey - natives !!

Well - Nairobi is filthy and quite frightening. I have taken some photos from the hotel window 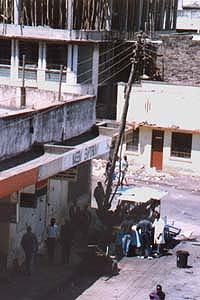 , I'm a little reluctant to get the camera out on the street although there are no end of photo opportunities - the buses and shops and stalls - boot polishing, fruit, sweets, literally just a few boiled sweets on a tray !! and biscuits - there are hairdressers and loads of greasy spoon type cafes. 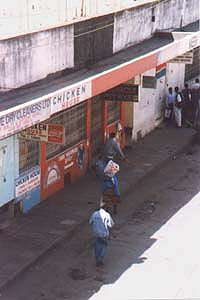 We have had egg and chips at one of them, for lunch - the chips were like the ones left at the bottom of the fryer !! but it was food. It cost 140/- (shillings) for both of us with coke. There are 83/- to £1.00 so that was pretty cheap - the room here has a shower of sorts, a loo, no seat or door just in with the shower in the room - not very private really ! it has cost us 940/- for both of us with breakfast. We had a walk around and booked a bus trip to Mombasa for tomorrow morning - it takes 8 hours to get there. We go across the Serengeti Planes, so there's a chance we'll see some wildlife. The journey only cost 300/- each, just under £4.00 - the taxi here was expensive though, but I think they have you cornered at the airport. Everyone seems very friendly - there is some begging but it's not too awful, but there is a lot of poverty and filth here. I wouldn't like to be here too long - there is a richer side, the Hilton Hotel and its like but of course that's far too expensive, and at least this way we see the real thing.

I bought this writing pad at a supermarket (lots of shops open even though it's Sunday) called Nakumatt, it was just like a huge Wilkinsons, some things cheaper, some dearer.

It's now 7:00 and I've just woken up after another sleep - trying to catch up. We went out for a walk up to the museum area. We saw a Kikuyu homestead, like mud huts, but really mostly wood with a straw roof. We walked back through some pretty shady places and Rod got his camouflage hat nicked by a kid. It really made me jump, but I was glad to see the back of it !!!

We went for a drink at the hotel bar last night. I had 2 tuskers(!) lagers, then we went to the Greasy Spoon next door and managed to get a veggie meal - bowl of beans, maize and potatoes which was good as I thought we might be living on fried eggs & chips ! Woke in the night with the headache from hell - probably due to tuskers, flying & tiredness. Breakfasted on fresh pineapple, melon, passion fruit juice and fried egg !! 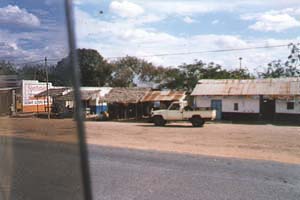 It's 1:00 and we have just stopped for lunch on our journey to Mombasa. We caught the 9:00 bus which left at 9:45 !!! Great fun. I've seen gazelle, ostrich, buffalo, mud huts and natives. Just taken a photo of stork in the tree near where we've stopped - seen the first cats - no cats or dogs in Nairobi.

Now in Mombasa 5:30 at the Glory Bed & Breakfast - well it's not very glorious ! 600/- for the night. We got a fan and a balcony - shower & loo over the corridor - they look very seedy - I shan't let my bum touch the loo - I shall hover !! After the lunch stop it took about another 4 hours to get here - no big game but we saw baboons - the ones with the red bums (obviously been using the loos here), some other apes, small deer and an assortment of birds. I've not taken many photos because getting the camera out draws attention to you. It's bad enough being hassled all the time to buy stuff - watches, bananas, magazines - they gather round the bus every time it stops and were all over it before we set off. They love us because we're the only whites on the bus and want to sell us everything at inflated prices - you have to just keep ignoring them.

We are down to no money until we get to a bank tomorrow. We are going to the Tanzanian Embassy to get visas. We have just managed a meal and a drink out and bought a bottle of water - it's much hotter here, very sticky. We went to the Hotel Splendid where Rod stayed before - a bit better than the Glory but 950/- per night which would seriously damage our budget - we went onto the roof to have a beer - really nice roof garden. Then we had guess what? - Egg & Chips. There are some nice curry places here but because of our money today we had to have chips again. I'm going to have curry tomorrow though. 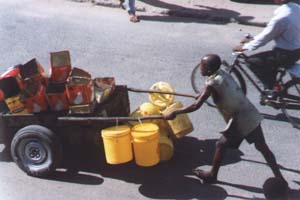 We shall stay in Mombasa for another night or two - but hopefully change hotels - I've just been to brush my teeth and the loo reminded me of "Trainspotting" Yuk !!

The scenery down here is quite different from round Nairobi - there are lots of coconut palms and pineapples growing - nearer to Nairobi is dryer so much more bush land - the soil is really bright orange.

Anyway just a taste so far - I might write the next instalment to Alex. Will you ring him and tell him I got here OK. Hope you are well - I'll keep in touch.


PS
When we were walking around tonight I saw real Massai warriors - 2 of them walking along the pavement - cool as you like !! with a spear - dead exciting - saw a few of the women as we passed places on the bus today.
Mombasa is the place with the giant elephant tusks over the street - I've seen them !!