Part 3 of the diary ! I'm on the island of Lamu - Alex will tell you about the journey !! We are staying at Lulu House which is lovely, by far the best place we've been so far. We have had a very relaxing day today. 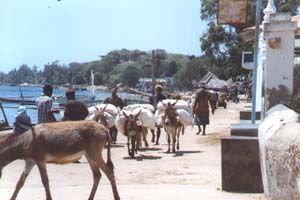 We went and had freshly squeezed pineapple juice overlooking the sea - watching the boats and people come and go. Went to the bank to change more money - it took ages they still write it all out by hand. Everyone here is very friendly - they are still trying to sell us things - trips on the boats (dhows) - meals etc - but they are good to talk to. 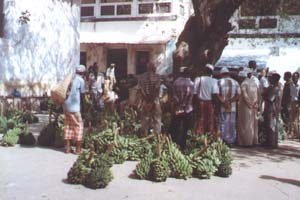 This morning sat with a German woman travelling alone - she was playing the game Bao which I learned to play. I've seen it for sale in England - it's probably too big to buy and bring back. Just as I finished that sentence a chap came and sold me one !! We bargained down from 300/- to 200/- and a beer ! So if I can remember how to play I will show you !

My birthday - breakfast at the Lulu - tea - no milk - all the milk is served hot and very fatty - so it's not nice in tea - fried egg !! and toast and jam. Then we went and met Mohammed who we arranged to take us out on a dhow trip to Manda Island for the day. We went with two American girls Stephanie & Tracy. The sailing was great, I really enjoyed it. Dot & Ian would love these boats - I took loads of photos. We got to Manda Beach about half an hour later - it's beautiful - we went swimming. Swimming in the Indian Ocean on my birthday - can't be bad. 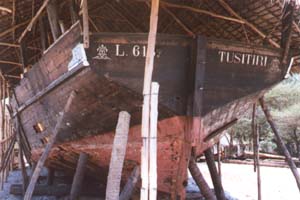 Then Sharif our captain took us to see a big dhow being restored for an Englishman to live on. Rod showed the boat builders photos of canal boats and they loved it - they kept 2 and took his address ! Ian would love the boat building on the beach - they use mangrove wood. We tried fishing before we landed on the beach with no success. After boat building we went to see an abandoned Italian hotel complex which was interesting - 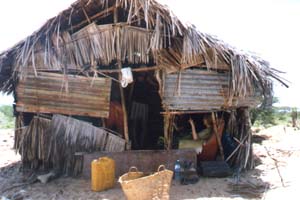 then we had lunch which they cooked for us in a hut - unfortunately it was fish !! Rod had some - I just had rice and some little bananas - then we sailed back to Lamu - it was great. I got quite burnt even though I covered myself in sun block - it is so hot here. We went back to Lulu and had showers to wash off the sand and salt. I'm now sitting in the New Star restaurant and I've had the best veg curry I've had for ages - so that made up for no lunch. I also had fresh papaya juice - not as nice as the freshly squeezed pineapple - that's a dream. This is a Muslim island so there's very little alcohol in fact only one bar (we found it ! Petley's Inn) so there are lots of juice bars along the front which are really good.

We are now on the bus journey to Malindi. We have stopped to change a tyre - quite impressive really - very quick - the bus is packed and someone has a radio on playing Indian type music !! very loudly !! There are armed soldiers on the bus because of bandits. It's 9 o'clock and we set off on the boat at 6:30 ! we had breakfast at Lulu at 5:30!! 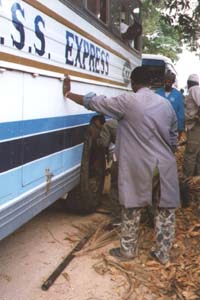 I was sorry to leave Lamu it was lovely there - I took lots of photos I hope they all come out. Seen monkeys and antelope this morning and very bright blue birds - an amazing village with huts made out of grass or palm huts shaped like an inverted U.

We are now at a stop - there are loads of people trying to sell us bananas etc. It's very hot although it has rained a little bit today - Rod has got off for a wander - the music is still playing - long live Take That I say !!!! This is where the soldiers leave us.

Well we have arrived in Malindi and have booked into Ozi's hotel, where Rod stayed before. We have a room for 3 (a bed for ted !) for the price of a double 600/- which is much better than we expected. We have a balcony and a view over a shanty street of shops and then the most brilliant beach and blue sea. I have to be careful today though as I got quite burnt yesterday even though I covered myself in sunscreen. We are really filthy after the journey, the dust goes everywhere. We have learned not to put on clean clothes for these journeys - the bags get covered in dust - it even gets inside ! It's a bank holiday today, Kenyatta Day but people still seem to be working, although most of the shops are closed, because it's Sunday - the banks are closed tomorrow which is a pain. Rod is going off with Duncan to change some American dollars somewhere - all a bit dodgy ! We are going to go snorkelling on the coral reef on Tuesday and Duncan has arranged it for us. We have had a walk around the tourist market - we were the only people there - I had a great time - didn't buy anything today, just checking it all out. I haven't seen any fabric I think you will like yet but it's early days. They use the one piece of fabric - same size - for so many things - tablecloths - wall hangings - for bundling stuff up to carry on their heads and for carrying babies. I saw some women today putting babies on their backs - they were so good and the babies just sat still - you wouldn't have done that ! You know Mandy sold her house to an Italian - well it seems that there's a big Italian influence (!) here - a lot of signs are written in Italian - I'm having spaghetti & tomato sauce for dinner too !! We are at the Metro Hotel for a meal - it's very downmarket !! Rod says it's a brothel - I think he's probably right - might be able to earn a few bob here - or not ! 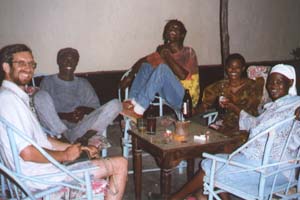 After our meal which was so-so - we took our beers down to the bar - which is outside and sat down and started chatting to two young chaps who have a shop on the souvenir market where we'd been earlier. They remembered me, probably because we were the only customers !! We had a great time with them - they really enjoyed talking to us. We met their sister Theresia and her daughter Sylvia - they had one of Rods photos and his address - they are still after our money but you can't blame them. We were trying to explain that we aren't rich in England, but of course compared to them we are.

This must be the noisiest place we've stayed - we are right by the mosque - there are loads all down the coast - and they started calling people to prayer with a loudspeaker at 4.20 this morning - then everyone is chatting. We are also right by the bus depot - where they repair and build the buses - it's like Rogers boatbuilding shed! I'm sitting on the balcony at the moment - I've had my first dose of the shits - not too awful - but I'm staying near the loo today and not eating. I can see some building work going on - the women are carrying baskets of soil on their heads. There's an awful lot of banging going on and the radio is playing the same wailing songs that we had on the bus yesterday!! 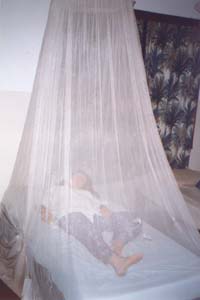 It's 1.30 now and I'm still on my death bed I think it's getting better now though. Rod went off to change money on the black market - it went well - he's paid the deposit for snorkelling tomorrow - so I shall have to be better then. He's now gone off to have lunch at the Tana Hotel where we went yesterday for lunch. He wants the same bean curry he had then - I hope he doesn't get what I have after all those beans - he'll be like a power boat when we go snorkelling - probably get to Zanzibar that way!

Spent the rest of the day in bed feeling pretty lousy - got bitten as well - just to help!! Had a couple of games of bao - it's a good game. Rod went out to eat and met Eric, one of the boys on the souvenir market - they are struggling it seems the Italians have taken over and pushed all the locals out - I shall try and buy something off them although our money is a bit tight.

Feeling better today but very weak and stomach hurts - went down for breakfast but just had black tea and half a slice of bread. Duncan came for us just after 9 o'clock. He didn't have a full party so wanted more money - but eventually took us. The beach in the marine park was lovely - they all are around here. We went out to the reef in a small boat with a glass panel in the bottom - tied up to the reef and the captain threw some bread in and the most amazing fish appeared. It was a wonderful sight - all colours and sizes - just wonderful. Rod went in snorkelling but I was a complete wimp - I didn't like the breathing bit and just couldn't cope with it so I got back in the boat and watched the fish through the glass - it was still good. Got back to Ozi's and had a sleep - still feeling rough really. Went for a walk to book the bus for Voi tomorrow morning - another 5 hour bus ride - but somehow I'm getting used to long bus journeys like that! We go through the game reserve again so may see something. While Rod was snorkelling the captain was telling me that the Italians had taken all their work - they own all the hotels and big houses and the hotels now have their own boats to take people to the reef. It seems the government won't help them, but then some Italians are very powerful as we know. The locals don't like them at all - and who can blame them. Rod has gone to change some more money - we are getting through it fast - I hope Tanzania and Malawi are cheap. I am resting again but hope to go out to the market to buy a couple of necklaces for Gemma and Jessicas birthday. I don't know how long the post takes, I expect it will be late - but at least I remembered.

Been to the market to see Tony and Francis and Steven and bought some key rings and necklaces - probably paid too much but it's in a good cause and they are so nice! Went and ate some chips, I thought they'd be the safest thing to eat as they have to be cooked at such a high temp. We walked along the pier first which was nice and cool and had a beer with Eric, one of the lads from the market. He said lots of people in England live on boats because he'd met one before. 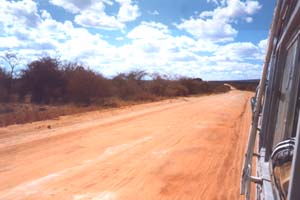 Up early with Allah's alarm call!!! Had some bread and black tea for breakfast and caught the bus to Voi. Saw some Maasai at the bus station with the henna hair do's. Thought they might get on my bus but they didn't - haven't managed to get a picture of one yet. They are all very tall and slim and with the beads and clothes look almost like TVs!

We are in Voi now at the Ghana Guest House - top floor - we have views of the mountains here which is good. It's very cheap at 450/-. I sat in a cafe while Rod found the place as I'm still not 100%. Saw another Maasai shopping - looked really strange with a shopping basket! Anyway, going to post this and G & J's present and get bus tickets to Tanzania.