Arrived Dedza at about 3 o'clock - a really nice little town in the hills - bus station in the trees - so lots of shade - much cooler up here. Had a walk around a few guest houses - pretty grim. Eventually decided on the Asangolole which had a double room and was very clean - but pit toilets and no showers.

Had a walk around town, went to a restaurant for a coke but we were told to go to the shop over the road - obvious really - the blanket store! Bought some fabric on impulse - fish for Penny and fags for Jane. Back for a game of bao. Then out for a beer and some food. Met a Canadian and his Malawian wife. He's lived here for 6 years and he's trying to teach the locals about organic farming as fertilisers are so expensive. Went to the Rainbow Restaurant for food as he recommended - we had green beans - a real change - veg and rice - nicely cooked though. Back for more bao - Rod won 2 out of 3.

Nice surprise - hot water. They had a huge drum with a fire burning under it and a chap gave me a bucket of hot water for a wash - that was good. Went to the Dedza Motel for breakfast. Struggling to get a good cup of tea here - he brought me hot water.

Sat at the bus station and waited for a decent bus. Caught a mini bus eventually - I was beginning to think that we'd missed all the buses. The journey was really good. We went along the border with Mozambique and the scenery through the hills was lovely. Had a plastic bag of chips and salad at one of the bus stops - no drinks though you could have bought a wooden tea-set.

Got to Zomba at about 1.45 - a fairly compact town - not as big as we'd expected. Booked into the Ndindeye Motel which is a bit more expensive but still in budget. Not bad, hot water and breakfast. Went for a walkabout. Met the Dutch bloke that we'd met in Livingstonia - his wife is ill in bed with Malaria. Checked out the restaurant then went for a beer - best sound system we've heard in Africa and they played the Cranberries too! Back for food which took ages - sat with the Dutch couple - she wasn't too bad, but still not well - had egg curry eventually.

Walked around town after a big breakfast which was a surprise - egg, chips, tomato, and steak & bread. Didn't think to say no meat as we've only had bread mostly in Malawi and apart from a sausage in Nairobi haven't been offered meat in the mornings.

Zomba not as interesting as we thought it would be - big market. Bought an African Doctor postcard to give to the Dutch woman - must find out their names (Ray & Mat). Also saw a card done by Alta, it was too expensive to buy. Bought a knife, pineapple and yoghurt and came back to the room to eat. Starting to see more fruit as we travel south - small peaches, plums and apples - there were only bananas and mangoes up north. Played bao again - he's getting better at it - I shall have to stop letting him win.

Up early and caught a minibus to Blantyre. It actually only took us to Limbe and we changed. Eventually made it to the bus station and booked into a dorm at Doogles - packed with white people.

Walked around Blantyre which was much more recognisable as a city - shops all closed - even a Next - much to Rods delight. Ate at Martins Tasty Foods - not so tasty, but there wasn't much choice. Spent the afternoon playing bao and chatting to the New Zealander and 2 Scandinavians we'd met in Livingstonia - went for some beer by the bus station as it's 12K at Doogles - outrageous! Had a bag of chips - nothing but egg & chips today. Had just enough money for some more beer and then off to bed.

Didn't sleep too well. Up early, then went into town to change money. Bought our bus tickets for tomorrow to Harare and paid for another night at Doogles. Walked to the post office and posted a letter to Penny. Went shopping for biscuits for the journey and then ate at The Vegetarian Takeaway. Had masala dosa - yummy - a real treat in this culinary dessert!!

Ray & Matty turned up at Doogles this morning, she's still not well - chatted to them, played bao. Went for beer at the container - met Michael, Bob Dylan & The Beatles. Had a lovely veg & rice meal at Doogles - I'm getting spoilt - 2 good meals in one day and no chips. I went to bed, Rod stayed with Ray & Matty.

Got the bus early but it was pretty full and we ended up sitting separately. Borders were long and hot, but I think we had the most efficient bus of the three that were going that way. Rod sat with a gold miner and his son and I sat with a sleaze bucket who was obviously getting the young woman with us to smuggle money over the border - which I think she did.

Went through Mozambique, not a lot there, had a puncture in the middle of nowhere but fortunately they had a spare. Crossed the Zambezi river - got very hot and sunburnt on my forehead through the window.

Got into Zimbabwe everything looked so much tidier and richer. Better farms, scenery wonderful. Got to Harare at about 5.30 and actually beat the other buses even though they left first and we had a puncture. Got picked up by Amos - who arranged a pick up to the Wayfarers Lodge - which was good as we hadn't managed to change any money and the lift was free - and everything else you could do on the tab. Had a good veggie meal and slept in the tree house. Great - rained and cool.

Not so great as Rod got bitten really badly on his ear and forehead. Got a lift into town. Went to change money, then to Air France to confirm our flights - we left the tickets with them for safe keeping. Walked around all the shops, which were great. Harare is just like a European city, loads of gift places to spend what I have left next Tuesday or use my visa. Had lunch at Wimpy. Changed some money at a Travel Agents at a shopping mall. Got a letter from Leah which was good. Looks like the souvenirs from the park will turn out to be the cheapest.

Bought a train ticket - went back to Wayfarers at 4 o'clock, had a beer and a meal. Chatted to the Aussie and New Zealanders that we'd met in Zanzibar and got a taxi with them to the station. The train left at 9 o'clock - it was quite Victorian with corridors, RR for Rhodesian Railways on the windows and mirrors. We had a coupe with our own sink. A chap came round with some bedding. Rod went to get a drink and met Mark, the Dutch chap who was in our dorm in Blantyre. He had booked third class and found he had no seat and also he thought it went straight to Vic Falls, but it stopped in Bulawayo and continues next night so he wasn't doing too well. 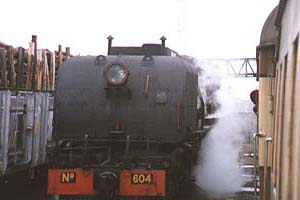 Got into Bulawayo at about 7 o'clock. I didn't sleep too well as the train was stopping and starting all night - but it wasn't too bad. It was cold in Bulawayo - met up with Mark who had managed to change his ticket and get a bed. We walked for miles (it seemed) to get a bus to Vic Falls. We ended up on a really luxurious bus with drinks, videos, a loo and comfy seats. It was a 6hr journey and it cost us Z$220 each, but it was quite comfortable. Rod watched 'Conan the Barbarian', 'Silence of the Hams' & 'Tec Wars' - which he missed the end of. 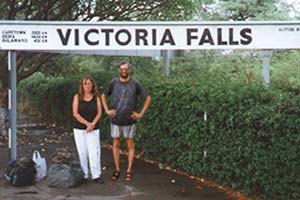 Got to Vic Falls at about 2 o'clock. The rest camp was full so we trudged with Mark to the backpackers place which was full also. They gave us a lift to a guesthouse - Mark decided not to stay but we did. It was expensive - Z$300 a night - but very comfortable and we had a bath. It decided to start raining just as we wanted to go out.

Walked to the Falls Gate in the town, you couldn't see the falls but you could see the spray. Went to the explorers bar which wasn't very good, too crowded and noisy. Had a pizza and garlic loaf which was huge. Not many, if any cheap places to eat here. Managed to book a chalet for tomorrow and Saturday night at the restcamp. Walked back in the dark.

Slept really well. Walked to Srayview Hotel to get a buffet breakfast. It was quite dear but you eat as much as you wanted - so we filled up. Went to Barclays and took out Z$1800 (£100) on my visa - as we are getting a bit low on funds - that should see us through. Back for the bags, we had a drink and then booked into our chalet. 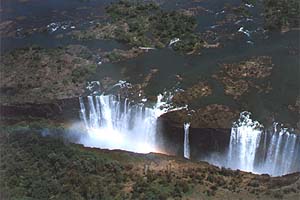 Walked to the Falls Park. The Falls are fantastic and it was a lovely park - very wet in places. Rod saved me from a green snake which the guard on the gate said could have been a Green Mamba !!! but we looked it up in book later and it was more likely a green water snake. Went and booked our train tickets for Sunday Z$270 then went to the cafe that closes early for a cheap meal. Had a curry which was very hot but not too good.

Rod booked us on a flight on a helicopter over the falls for tomorrow morning. Went to the rest camp bar which was good - there were singers, drummers and dancers busking. They were really good. Got talking to a chap called Tamuka - our first local.

Slept well. Went to the Pink Baobab cafe for breakfast which was nice. Then got picked up for our flight. It was wonderful - took loads of photos. 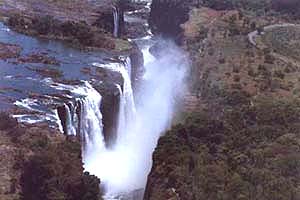 It was only 15 mins but we had fantastic views of the falls, gorge, river, rafting and hippos. A really good trip. Did some more walking around souvenir shops - but it's more expensive here than in Harare. There's load to buy though - I'll have no trouble spending.

Went see the crocodile in the sculpture park. Decided not to cycle to the nature reserve as it's too hot today. Bought some Nyami Nyami necklaces as gifts - Rod bargained them down to Z$2 each. Went to the snake park - not many snakes - but saw a Green Mamba - much bigger that what we saw in the park. Rod beat me at Bao again - it's getting boring him winning all the time. Went to the pizza place for a meal again - not much choice otherwise. 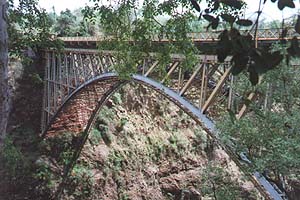 Went to Wimpy for breakfast. Went back to camp to check out. Put our bags in the cloakroom and the went to go to Zambia. Went through the Zimbabwe border post and watched bungy jumping on the bridge. Went to Zambia only to be told that they had introduced visa fees as of today. We decided not to pay as it would have made the whole thing very expensive. Walked back to Zimbabwe and got stamped back in. Decided to go back to the Victoria Falls Park.